Clayton Beck graduated from the American Academy of Art in Chicago. During the mid to late 1980’s, he taught and studied here at the Palette and Chisel with Richard Schmid. He is currently represented in galleries throughout the Midwest and Southwestern US. He has received awards of excellence and distinction from the Midwest Pastel Society, the Pastel Society of America, the Municipal Art League of Chicago, the Palette & Chisel and the Oil Painters of America. 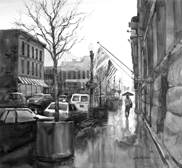 David R. Becker is a respected illustrator, fine artist and art instructor. He is the author of ”Watercolor Composition Made Easy” (1999), and ”How to Sketch with Watercolor” (2003), both published by North Light Books. Becker has had articles published in International Artist, American Artist and Watercolor Magic magazines. Becker began teaching watercolor in 1983 while still a student at the American Academy of Art in Chicago. Since then he has taught classes at the Palette and Chisel and has led many workshops around the country. 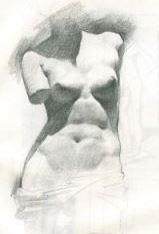 Andrew S. Conklin holds a BFA from the American Academy of Art in Chicago and an MFA from the Academy of Art University in San Francisco. He received additional instruction at the National Academy of Design in New York and from portraitist Aaron Shikler, painter of the official JFK White House portrait.
Conklin has received a number of awards and grants from national institutions, including the George Sugarman Foundation, the E.D. Foundation, the Elizabeth Greenshields Foundation, and the John F. and Anna Lee Stacey Scholarship Fund.

Conklin has taught in the MFA program of the New York Academy of Art, where he continues teaching workshops in Dutch painting techniques. He has authored articles on painting and drawing in national publications, and his work has appeared in New American Paintings, No. 29 and 83. He is represented in Chicago by Ann Nathan Gallery.

A native of Italy, Ralph’s love for art has inspired him to depict the human figure since his teenage years. He has studied at the American Academy of Art. The School of the Art Institute, The Palette and Chisel Academy of Fine Arts and Clinard Sculptures and drawings have been displayed in various galleries throughout Chicago. 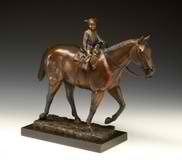 Audry is a graduate of the Colorado Institute of Art and has been teaching sculpture at the Palette and Chisel since 2006.  She continues to refine and enhance her skills as a sculptor through study in Paris France, Florence Italy and elsewhere.  Audry has exhibited nationally and her work is collected across the United States and abroad.  She is honored to have received many awards for her work.  In Chicago, Audry is represented by Jackson Junge Gallery.

James Hajicek graduated from the School of Representational Art and furthered his studies with some of the most accomplished artists of our time, including Dan Gerhartz and David Leffel. He has taught plein air painting, artistic anatomy, portrait and figure drawing. James has taught at the Highland Arts Center, Peninsula School of Art and has popular classes at the Palette and Chisel.

His work has been exhibited at the Fort Wayne Museum of Art and the Art Museum of Greater Lafayette, in Indiana. He is an in demand juror for Chicago area exhibitions, and is co-author of the artists’ book, “Quick Sketch”, published at Columbia College Chicago Center for Book and Paper Arts. Most recently he was selected as one of the guest artists on the sculpture exhibition team for the annual four-day event, “Snow Days Chicago 2013”, held at Navy Pier. 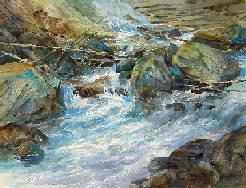 Bob Krajecki started his art studied with the Famous Artists Correspondence course from Westport, Conn. Drafted into the United States Army Aircorps during the Vietnam conflict, he became the staff artist for the “Army Flyer” newspaper. He continued his studies at the American Academy of Art and the Chicago Academy of Fine Art in Chicago, receiving his degree in watercolor painting.

Upon graduation, Bob pursued a fine art career and exhibited his paintings throughout the Chicagoland area. He started teaching classes in Downers Grove and in Lyons. Bob started teaching full time at the American Academy of Art in 1972, teaching classes in the fundamentals of art, watercolor painting, architectural illustration, cartooning and Adobe Photoshop. He was chosen as the first chairman of the Fundamentals program when the Academy introduced the Bachelor of Arts program.

Bob is currently teaching classes at the Palette and Chisel Academy, and at the Kaneville Community Center in the Fox Valley Area and does demonstration painting and workshops throughout the Chicagoland area.

Helen Oh is a painter and conservator of old master paintings. Her oil paintings have been exhibited at the Terra Museum of American Art, National Academy of Design Museum, NY; Elmhurst Art Museum, IL; Muscarelle Museum of Art, VA; St. Anselm College, NH; University of Illinois at Chicago; Harper College, IL; Chicago Athenaeum; Arts Club of Chicago; ACA Gallery, NY; Salander-O’Reilly Galleries, NY. Her work is in the collection of Columbia University and the Americas Society in New York City. She has received two Elizabeth Greenshields Foundation Grants. Oh teaches Painting—Materials and Method class at the School of the Art Institute of Chicago. 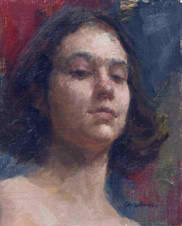 Marci Oleszkiewicz is a painter whose work has been said to exude a sense of peace and calm. Her paintings have recently received several awards including Best of Show at the 2007 American Impressionist Society National Show. She is currently represented by Gallery Russia in Scottsdale AZ and Barnsite Gallery in Kewaunee, WI. Marci has received the vast amount of her training at the Palette and Chisel Academy of Fine Arts. She is a member of the Oil Painters of America, The Society of Master Impressionists, the Plein Air Painters of Chicago and the American Impressionists Society. To view her work, visit www.marcioleszkiewicz.com or her artist blog at www.marcipaints.blogspot.com.

Of the many ways one might describe Dale Popovich, visionary may be most apt, for talent and ability aside, it is the quality of Popovich’s vision that defines his work. Temporarily blinded at 20, Popovich had only his visual memories to keep him company. And he learned to pare down the images until what remained – and stayed with him- were the essences of what he remembered. This purity of vision is realized through a rare selectivity of detail that gives each painting uncommon strength. Popovich paints the midewest in keenly perceived landscapes that celebrate Nature and Man’s humble attempts to tame it. Every painting is vivid in his mind’s eye; he paints from this vision rather then from life. By mentally wandering the scene, he breathed dimension in to the paper with strong, moody interplay of light and dark – a true colorist’s eye into the scene-bridges by which virtually everyone can follow. WE are pleased to offer to you this experience. An we hope you will be stirred by it as we are. Popovich has a degree in Fine Art from the American Academy of Art in Chicago, He had devoted 25 years of teaching numerous fine art and graphic design courses in the Heartland. He presently illustrated for two national magazines, Water Gardening and Midwest Gardening. 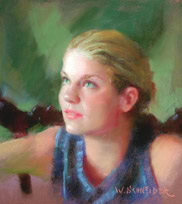 William attended the American Academy of Art.  He also studied with Harley Brown, Scott Christensen, Dan Gerhartz, Ramon Kelley, Huihan Liu and Richard Schmid. His paintings have been featured in American Artist, Southwest Art, Art of the West, International Artist, The Pastel Journal, Art-Talk and The Artists’ Magazines .He has won awards in many national shows including those of: The Pastel Society of America, Salon International, International Museum of Contemporary Masters, and The Portrait Society of America. He shows in galleries in Napa Valley, Santa Fe, Cape Cod, and Door County. He is also a Signature member of the Pastel Society of America.

William has authored instructional books for Walter Foster Publishing, including Pastel II, and The Art of Oil Painting. His work is also featured in Pure Color: The Best of Pastel, North Light Books, 2005. His instructional pastel DVD was released by Liliedahl Video Productions in the spring of 2006 (www.lilipubs.com). 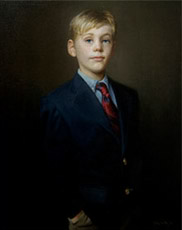 Michael is a graduate of the American Academy of Art in Chicago. While running his own graphic design studio, Michael took evening and weekend classes here at the Palette and Chisel and in New York at the Art Students League to advance his training as an artist. Michael is now a full-time professional portrait and gallery artist and has been exhibiting work in various shows and galleries across Illinois & the nation. He has received multiple commissions, honors, and recognition from: Portrait Society of America, Portrait Society of Atlanta and American Artist Magazine. 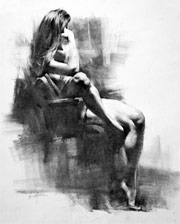 Influenced by great realistic masters’ works of Repin, Levitan, Fechin, Sargent… Henry Yan started his formal academic studies of drawing and painting at the age of 15. He received his strict fine art training under some leading artists and art professors of China. Henry Yan has been a full-time member of the faculty at the Academy of Art University since 1996. Yan is the author of the acclaimed book Henry Yan’s Figure Drawing – Techniques and Tips. His work is held in private collections and galleries worldwide.