Andrew S. Conklin holds a BFA from the American Academy of Art in Chicago and an MFA from the Academy of Art University in San Francisco. He received additional instruction at the National Academy of Design in New York and from portraitist Aaron Shikler, painter of the official JFK White House portrait.

Conklin has received a number of awards and grants from national institutions, including the George Sugarman Foundation, the E.D. Foundation, the Elizabeth Greenshields Foundation, and the John F. and Anna Lee Stacey Scholarship Fund.

Conklin has taught in the MFA program of the New York Academy of Art, where he continues teaching workshops in Dutch painting techniques. He has authored articles on painting and drawing in national publications, and his work has appeared in New American Paintings, No. 29 and 83. He is represented in Chicago by Gallery Victor Armendariz. 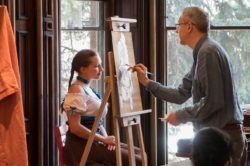