Errol Jacobson is a Chicago based artist who works in oils. Errol received a majority of his training at the renowned Palette and Chisel Academy of Fine Arts located in Chicago. In addition, he has studied independently with master painters further honing his skills as an artist. As well as being an artist member of the Palette and Chisel, he is also a member of the Plein Air Painters of Chicago and The American Impressionist Society. Errol exhibits widely throughout the Chicago area and his works can be found in many private collections. 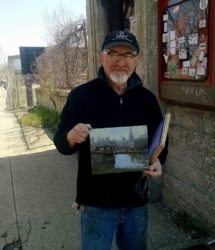 Errol paints both en plein air and in his Chicago studio. His paintings are known for their atmospheric quality and somewhat moody feel. He has recently devoted himself to painting cityscapes, attempting to capture the energy, vitality and spirit of the city. He sometimes paints recognizable landmarks but often paints overlooked areas and other aspects of the city.